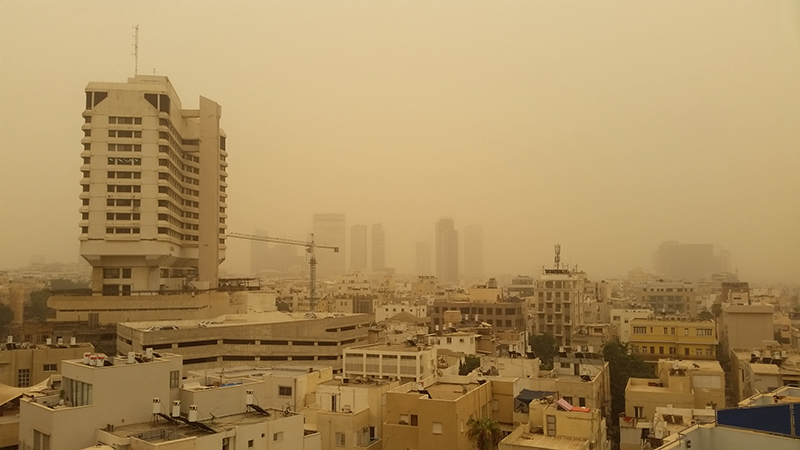 A dense sandstorm engulfing parts of the Middle East has left at least eight people dead and hundreds suffering from respiratory problems, as officials warn residents to stay indoors.

Large parts of Lebanon, Syria, Israel and Cyprus were shrouded in a thick cloud of dust from the storm that began sweeping into the region on Monday.

Refugees from Syria now living in basic conditions in Lebanon were badly affected.

In Syria itself, the storm meant government warplanes and helicopters carried out fewer strikes, but at least six people died across the country from respiratory failure, a monitor said.

“There were four [killed] in Deir Ezzor, including a child and an elderly woman, as well as another child in Hama province and a person in Daraa,” head of the Syrian Observatory for Human Rights Rami Abdel Rahman said.

Lebanon’s health ministry said two women had died at hospitals in the eastern Bekaa Valley region because of the storm, without specifying their nationality.

“The number of cases of choking and shortness of breath caused by the sandstorm has risen to 750,” the ministry said.

The storm was felt particularly in Lebanon’s dozens of informal camps where hundreds of thousands of Syrian refugees live with limited shelter.

Lebanon’s education minister Elias Bou Saab ordered private schools across the country to close on Wednesday, calling on “school officials to respect this decision and to protect students from any danger”, a ministry statement said.

“It usually happens twice or even three times a year in Lebanon but during spring, March and April, and the unusual thing today is the density of the storm,” he said.

In the Syrian city of Mayadeen in Deir Ezzor, several hospitals were no longer receiving patients suffering respiratory problems after running out of oxygen tanks, the Observatory said.

Syria’s health minister urged citizens to “avoid prolonged exposure to the outdoors” and said hundreds of people had been treated for asthma and other respiratory problems.

The dust cut visibility for regime aircraft, which carried out relatively few strikes during the storm, the Observatory said.

“The sandstorm has paralysed regime airplanes, there were only a few strikes in Damascus province,” said Abdel Rahman.

A thick haze hung over Jerusalem and much of Israel and the Palestinian Territories, with officials warning the vulnerable to stay indoors.

The view from the Mount of Olives – normally a sweeping panorama of Jerusalem’s Old City and the Al-Aqsa mosque compound with its golden Dome of the Rock – was completely obscured by the dust.

The thick cloud also enveloped parts of the eastern Mediterranean island of Cyprus, where residents were told to limit their time outdoors.

Health officials warned that the concentration of dust particles in the air was many times above normal levels.

Several flights were diverted from the coastal airport of Larnaca as visibility dropped to 500 metres, although flights began arriving again as scheduled later on Tuesday.

Cyprus was also suffering from a heatwave, with inland temperatures hitting 41 degrees Celsius.

Its interior ministry said dozens of Syrian refugees who had been rescued from a fishing boat off the coast on Sunday had been moved from a makeshift camp to a better-equipped facility because of the extreme weather.

The effects of the storm also reached Cairo, where the skyline was obscured by a thick haze.

Wahid Saudi, a top official at Egypt’s weather authority, said the dust had blown in from the eastern Mediterranean region and was expected to clear after several hours.