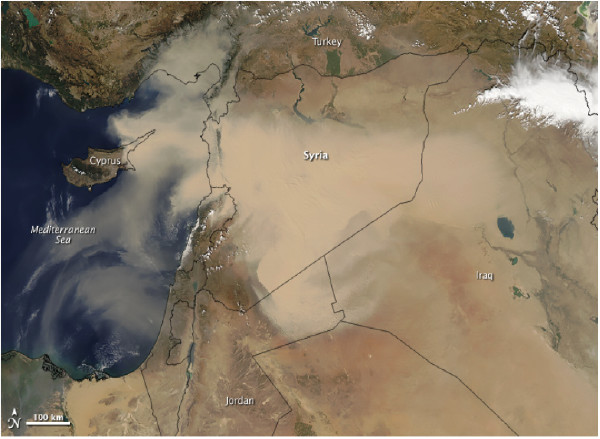 We experienced a severe sand storm during our last two days in Israel. I have never been in one before and always thought it would be gritty sand blowing around in fierce winds. But no, there was no discernible wind yet a pinkish sky moved over the whole country and completely enveloped everything. The secret of its movement it seems was the fact that the sand was so fine like talcum powder or confectioner sugar. It did not take discernible wind to move the awesome clouds of sand.

If any of our readers receive a prophetic insight on this please send it to us click here.

With Russia moving southward, invading Ukraine and now moving and setting up military bases in Syria on Israel’s border, could this be setting the stage for the Cog war of Ezekiel 38 and 39?

This may be one of the signs of the prelude to Ezekiel 38 and 39, the Gog/Magog war that God will bring on Israel to glorify Himself. Note the allies with Gog/Magog (specifically Persia which is the most dominant in the News these days as Russia is 100% aligned with Iran). Although Israel is at threat from all around, they are dwelling safely in villages without walls (a condition stated in verse 8 and 11).

38 Now the word of the Lord came to me, saying,

2 “Son of man, set your face against Gog, of the land of Magog, the prince of Rosh, Meshech, and Tubal, and prophesy against him,

3 and say, ‘Thus says the Lord God: “Behold, I am against you, O Gog, the prince of Rosh, Meshech, and Tubal.

4 I will turn you around, put hooks into your jaws, and lead you out, with all your army, horses, and horsemen, all splendidly clothed, a great company with bucklers and shields, all of them handling swords.

5 Persia, Ethiopia, and Libya are with them, all of them with shield and helmet;

7 “Prepare yourself and be ready, you and all your companies that are gathered about you; and be a guard for them.

8 After many days you will be visited. In the latter years you will come into the land of those brought back from the sword and gathered from many people on the mountains of Israel, which had long been desolate; they were brought out of the nations, and now all of them dwell safely.

9 You will ascend, coming like a storm, covering the land like a cloud, you and all your troops and many peoples with you.”

10 ‘Thus says the Lord God: “On that day it shall come to pass that thoughts will arise in your mind, and you will make an evil plan:

11 You will say, ‘I will go up against a land of unwalled villages; I will go to a peaceful people, who dwell safely, all of them dwelling without walls, and having neither bars nor gates’ — NKJV

We encourage you to read both chapters and beyond.

Awesome and fearful, but our Lord starts and finishes this war. Praise the Lord if this is the day!

19 In that day there will be an altar to the Lord in the midst of the land of Egypt, and a pillar to the Lord at its border. a person or thing regarded as reliably providing essential support for something.

20 And it will be for a sign and for a witness to the Lord of hosts in the land of Egypt; for they will cry to the Lord because of the oppressors, and He will send them a Savior and a Mighty One, and He will deliver them.

21 Then the Lord will be known to Egypt, and the Egyptians will know the Lord in that day, and will make sacrifice and offering; yes, they will make a vow to the Lord and perform it.

22 And the Lord will strike Egypt, He will strike and heal it; they will return to the Lord, and He will be entreated by them and heal them.

24 In that day Israel will be one of three with Egypt and Assyria — a blessing in the midst of the land,

25 whom the Lord of hosts shall bless, saying, “Blessed is Egypt My people, and Assyria the work of My hands, and Israel My inheritance.”  NKJV

Certainly we don’t pretend to understand the depths of Prophesy of Scripture but suppose we see parts?

We do know that, thru agreements, neither Israel nor Egypt is supposed to send armies into the Sinai without permission of the other.

Due to the Muslim Brotherhood’s failed attempt to take control of Egypt and the tunnels built on the southern side of Gaza (there are tunnels on Israel’s side as well) to allow attacks to Egyptian military men and police, Egypt asked for permission to go into the Sinai and kill as many terrorists as they can. Israel granted permission and both countries now work together to eliminate all terrorism.

Maybe they are not yet friends but they have created an axis with a common cause. Consider ancient Assyria which could arguably include the Kurds, northern Iraq, northeastern Syria, northwestern Iran, and southern Turkey. Could somehow these come together to form the northern part of the axis? Certainly the Kurds and Iraqis have the same things in common with Israel and Egypt when it comes to killing terrorists!

Knowing that God will make the axis to happen, it is worth considering. Praise the Lord!